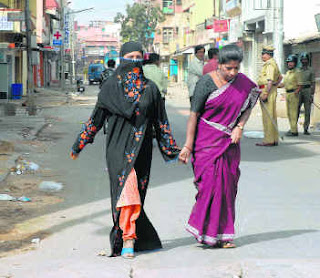 Something that has always puzzled me is the amount of people who trek off to Indian to visit all kinds of Gurus, and they go on about what a spiritual country it is. Yet India is amongst the worse countries for violence and hatred against women. How can we ever move forward when people constantly look to different flavours of patriarchy and hatred to become 'spiritual' and how can they ever be balanced when they are taught that women are second class citizens. Both Buddhism and Hinduism are deeply patriarchal religions.

I am sure you have all come across one the types who has visited India or some other Eastern country, who dresses like a Monk and sit there in judgement of everyone else, telling them they are not being spiritual for doing this that or the other. You aren't even allowed to crack a smile in their book.

They take themselves so seriously, and they are so pretentious and obnoxious; they really do think the Sun shines out of their arse, and that their shit doesn't stink like everyone else's. Yes annoying aren't they? Namaste this, Namaste that.

Perhaps even more annoying than the New Age Wiccan & Druids who run about saying they are White Witches, without realising their religions are based on Freemasonry, just like Mormons and Scientology, what does that tell you?

Or maybe the Galactic Retardation of Light crew, well you know, nothing needs to be said about those.

These people are all just on their own paths, searching desperately for answers and a purpose. They wear a mask and hide behind a facade of peace and tranquility, when their words and actions show something completely different, and actually quite sinister.

All these religions are different shades of the same colour. No wonder they all talk about Co-existing. It is fine as long as none of them are actually changing anything, or bringing truth and allowing them to empower themselves by coming to 'Know Thyself'.

The simple truth is that until you forget all patriarchal formed and controlled religions and start looking within yourself, you will never find what you are so desperately seeking. Until you stop following the crowd and pretending to fit in, you will never find peace. Your path is yours, not some old bloke's sat in Indian or someone who wrote a book, or someone who appeared on Oprah. Look inside.

Just a little something for all those who walk about saying 'Namaste' and thinking they support something loving, peaceful and spiritual:

In Dharmasastra, which is a Hindu moral and legal text(all women are whores):Good looks do not matter to them, nor do they care about youth; 'A man!' they say, and enjoy sex with him, whether he is good-looking or ugly. By running after men like whores, by their fickle minds, and by their naturallack of affection these women are unfaithful to their husbands even when they are zealously guarded here. Knowing that their very own nature is like this, as it was born at the creation by the Lord of Creatures (Prajapati), a man should make the utmost effort to guard them. The bed and the seat, jewellery, lust, anger, crookedness, a malicious nature, and bad conduct are what Manu assigned to women. There is no ritual with Vedic verses for women; this is a firmly established point of law. For women, who have no virile strength, and no Vedic verses, are falsehood; this is well established. Manusmrti 9:14-18.

In Dharmasastra(women need to be kept under control)Men must make their women dependent day and night, and keep under their own control those who are attached to sensory objects. Her father guards her in childhood, her husband guards her in youth, and her sons guard her in old age. A woman is not fit for independence. -- Manusmrti 9:2-4.

In the Vedas:"Lord Indra himself has said, 'The mind of woman cannot be disciplined; she has very little intelligence.' -- Rig Veda 8:33:17.

In the Purunas(Hindu Gods Rape Gautama's wife)Formerly the gods lusted for Gautama's wife and raped her, for their wits were destroyed by lust. Then they were terrified and went to the sage Durvasas [an incarnation of Siva], who said, 'I will remove all your defilements with the Satarudriya Mantra [an ancient Saiva prayer].' Then he gave them ashes which they smeared upon their bodies, and their sins were shaken off. --Padma Purana 4:101:174-9.

In the Smriti(Lord Rama's mom has sex with a horse 'all night long' to cleanse sins):The prescribed victims -- snakes, birds, the horse, and aquatic animals -- were bound at the place of immolation; each was dedicated to a specific divinity as is set forth in the ritual texts. The priests then bound them all to the posts in the manner set forth in the ritual texts. Three hundred beasts in addition to Dasaratha's jewel of a horse were bound there to the sacrificial posts. Kausalya (Rama's mom) walked reverently all around the horse and then with the greatest joy cut it with three knives. Her mind unwavering in her desire for righteousness, Kausalya (Rama's mom) passed one night with the horse. The priests -- the hotr, the adhvaryu, and the udgatr -- saw to it that the second and the juniormost of the king's wives, as well as his chief queen, were united with the horse. Then the officiating priest, who was extremely adept and held his senses in check, removed the fat of the horse and cooked it in the manner prescribed in the ritual texts. At the proper time and in accordance with the ritual prescriptions, the lord of men then sniffed the fragrance of the smoking fat, thereby freeing himself from sin. Then, acting in unison, the sixteen brahman officiating priests threw the limbs of the horse into the fire, in accordance with the ritualinjunctions. In other sacrifices, the oblation is offered upon branches of the plaksa tree, but in the Horse Sacrifice alone the apportionment of the victim is made on a bed of reeds. The Horse Sacrifice is known as the Three-Day Rite; for both the kalpasutra and the brahmanas refer to the Horse Sacrifice as a rite lasting for three days. -- Ramayana 1:13:24-33.

In the Smriti(method of turning women back to virgins):"A woman who has been unchaste should worship Siva in his calm aspect, Siva who is Kama. Then she should summon a Brahmin and give herself to him, thinking, 'This is Kama who has come for the sake of sexual pleasure.' Andwhatever the Brahmin wishes, the sensuous woman should do. For thirteen months she should honour in this way any Brahmin who comes to the house for the sake of sexual pleasures, and there is no immorality in this for noble ladies or prostitutes." -- Matsya Purana 70:40-60; cf. Mahabharata III:2:23.