Our Church is Gnostic NOT Roman Catholic

There is some confusion about our Church because of another Church with the same name as ours in Ireland. Which is found here http://en.wikipedia.org/wiki/Church_of_St_Mary_and_St_John

People are maliciously spreading rumours that we are involved with the Roman Catholic Church.

The Church of St Mary & St John is a Celtic Gnostic Church which has nothing at all to do with the Roman Catholic Church, Christianity or any other religion.

Our St Mary is Mary Magdalene and St John is John the Baptist.

We are not congregational, and have no fixed building as a Church or Temple, we can set up to perform our ceremonies anywhere. Our ceremonies are esoteric and not for the profane.

I hope this clear things up.

Posted by Tau Tia L Douglass at 13:20 No comments:

The Great Work - What Is It?

The Great Work is simply your own personal path towards illumination or coming to know thyself.

When you take a structured course involving ritual magick it is easier to make sense of everything and to know where you are using the Kabbalistic Tree of Life as a map.

Another way is to isolate yourself and just meditate, until one day you might suddenly just 'get it' but that is a long shot, and in my view a waste of your life, when you could be living it and doing other things.

The Gnostic Theolalite route through our Church does involve some meditation and taking time out to be alone with your thoughts, but it does not take over your life completely. If you are very serious about it though, you are likely to want to spend a lot of your time on it, eagerness, after all, is what it takes to be a true seeker of Gnosis. The course does not tell you what you should or shouldn't do on your own journey, it just helps you to learn about all the tools to help you on your way, and also teaches about various other things that are spirituality related.

Everyone's path is different, we know that, and so should you. You couldn't pick up a text book, read the full instructions on how someone else became illuminated and expect it to work for you. By learning how it worked out for others, and taking bits and pieces from that, you can find your own way. Within a helpful community, such as our Church, you also have all the support you need along the way.

Gnosticism - What is it? 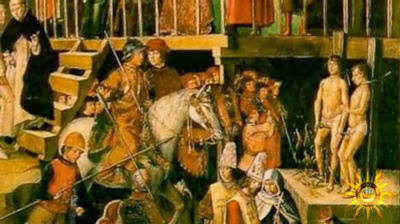 Over time the general public have been led to believe many falsities about what it means to be Gnostic. They are told that the tradition came about in France, at about the time the Roman Catholic Church decided to burn our Gnostic ancestors at the stake for heresy. It is a repeating theme of the RC Church over the years, as time and time again they burnt people at the stake who failed to convert to their dogmatic religion which is based purely on allegory.

Gnostics have been about for hundreds of thousands of years, they were first Shamans. To say Gnostics are Christian is laughable.

If anyone would like to know about Gnosticism, they can read more here
http://www.templeoftheola.org/gnostic-theolalites.html

If anyone would like to take a course on Esoteric Comparative Theology, please feel free to visit our web site and learn more about our seminary. On the course you will learn the hidden (occult) truth about ALL religions, and learn all about esoteric teachings for which the Roman Catholic Church murdered millions to try to keep this information from the people, as it would free them from the slavery and dogma the RC Church created through their lust for power and greed.

The GNOSIS has been kept safe within our bloodline, and it will be known to all true seekers.
http://churchsmsj.org/index.php/seminary

People who are caught up in religious dogma can not see the Divine Light of Gnosis, religion brainwashes and blinds them to the truth.

The Roman Catholic Church is the largest Church in the world, they all went through the wide gate and will never reach illumination.

Posted by Tau Tia L Douglass at 09:45 No comments:


Did you know that every time you have meaningless sex with someone you don't love, you become dumber and less aware? It makes it harder to complete the Great Work, another reason why men find it harder than women.

When Aleister Crowley talked about sacrificing a young boy, he was talking about when he climaxes, he has made a sacrifice.

“For the highest spiritual working one must accordingly choose that victim which contains the greatest and purest force. A male child of perfect innocence and high intelligence is the most satisfactory and suitable victim.”

Making this sacrifice will make things harder to complete the work. Most people just do what is right for them NOW, and don't care about the consequences later, that is why New Age religions go on and on about living in the now, they never want you to reach your full potential. Of course it is wise to not worry about the past or the future, too much. However, if you don't 'act' now for the sake of your future, nothing ever changes, including your level of spiritual attainment.

When you practise tantra you learn to never climax, and instead to loop the energy back round your system, so that it shoots back up your spine and down again in a cycle, in the figure of 8, the centre of the 8 is at your heart chakra, which is why performing tantra is about love and respect of yourself and your partner. This is one way to have sex without draining away your energy. The ecstasy can then last as long as you like as you loop the energy round. When you end the session, rather than climaxing you send the energy to your Crown, making it a win win situation.

Sending out bad energy to others, hurts you as much as your victim though. Others sending you bad energy, does affect your life, people in the public eye risk a lot by being there.... hence, they have sold their soul to the Devil, the Devil here represents the dark side which is inside all of us, we can use our energy for good or bad. Using it for bad harms us, using it for good is a sacrifice, using it within ourselves helps us in the Great Work.