Signs and Symbols of the Grail Bloodline 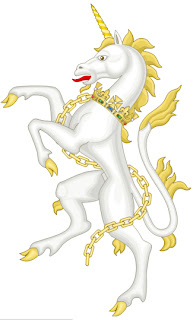 The Unicorn is symbol of the patriarchal Grail line. The equivalent traditional symbol of the male was a blade or a horn, usually represented by a sword. In the Old Testament's Song of Solomon and in the Psalms of David, the fertile unicorn is associated with the kingly line of Judah - and it was for this very reason that the Cathars of Provence used the mystical beast to symbolise the Grail bloodline. There is much confusion about the female line, as it has been well hidden. However names with water in them, mermaid symbols, stars, shells, chalice and swans all represent the female line. And despite the disinformation, the fleur-de-lys is to represent purity within both patriarchal and matriarchal lines.