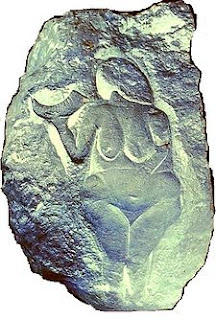 The Venus of Laussel is a Venus figurine, a 1.5 foot high limestone bas-relief of a nude female figure, painted with red ochre. It was carved into a large block of fallen limestone in a rock shelter in the commune of Marquay, in the Dordogne department of southwestern France. The carving is approximately 25,000 years old. It is currently displayed in the Musée d'Aquitaine in Bordeaux, France.

The figure holds a wisent horn in one hand, which has 13 notches. This is to symbolise the number of moons and menstrual cycles in one year.

She has her hand on her abdomen (or womb) indicating pregnancy, with large breasts and vulva. There is a "Y" on her thigh and her faceless head is turned toward the horn.

As with all Venus figurine they represent fertility and the Mother Goddess who from whom all life is created. The figures also represent abundance.

This ancient Goddess craving is a beautiful example of Serpent Bloodline art. These representations of the Goddess would be placed on or near the Altar during ceremonies and smaller versions carried with females who were hoping to become pregnant. 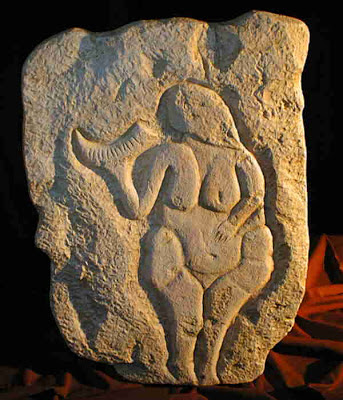 Email ThisBlogThis!Share to TwitterShare to FacebookShare to Pinterest
Labels: Venus of Laussel