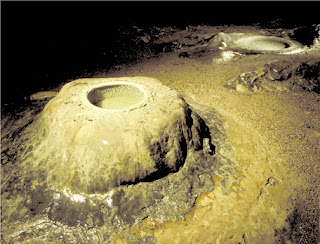 The Neanderthal people left many remains of their ancient spiritual practices – many of which show striking continuity with later times.

A striking example of a Neanderthal religious site was found in the Drachenloch cave in the Swiss Alps. The front of the cave apparently served as a periodic dwelling place, while deeper within the mountain were both a Shrine and a Temple. Inside the Shrine was a three-foot square stone box, which functioned as a reliquary. Inside the reliquary were the skulls of seven cave bears.

Another example of a Neanderthal Shrine or Temple was found in the Cave of the Witches, near Genoa Italy. Here a ritual seems to have been enacted that involved the magical “hunting” of a sacred stalactite that resembled an animal such as a bison. Evidence indicates that the stalactite was regularly used as a target for stone throwing – this is believed to have been magical in nature because the stalactite is not easily accessible, being awkwardly placed deep within the cave.
Posted by Tau Tia L Douglass at 21:58