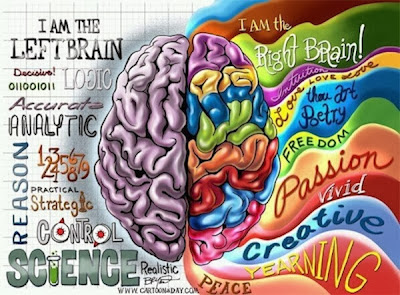 When looking into how our brains work we have all heard that the left brain is responsible for logical and linear thinking, where as the right brain is responsible for the creative, artistic, empathetic. Where as this is true, there is a bit of each in the other side too. But what is most interesting is how most people look to Gods for how things are in the world, but when they do the Great Work they realise that we are the Gods and Goddesses. Let me explain.

In the first Aeon we had Matriarchy (This is the Mother part of the Trinity) - this was a time when right brain thought ruled through society, meaning people were generally more creative, artistic and empathetic. Because generally females are more in tune with their right brains, than males, who tend to be more left brained, it meant that females were given more respect as leading the way in the mainstream norm of the day. If someone came along and tried to solve something in a more logical way they would have been shunned and told they were wrong to think like that, and this led to resentment and eventually disharmony among the left brain thinkers, who rebelled and took over. This was easy for them, because the right brained people are loving and peaceful, they don't want wars. So to the logical left brainers it was a piece of cake. They saw this is as weakness that they took advantage of.

Then came the second Aeon, which we are in now, the Aeon of Patriarchy (This is the Father part of the Trinity) - this is a time when left brain thinking is dominant, and anyone who is a right brained thinker is shunned as being different. The catchphrase of the day is - that isn't logical. It is seen as being silly and daft to be a right brained thinker. Don't let your emotions run away with you, they say. It is a cold world that left brain thinkers invent and it hurts everyone, not just the right brained thinkers. But slowly the left brained thinkers start to get tired of war and hate, and the dog eat dog 'logical' culture and decide to become more empathetic. This is starting to happen now, slowly, but it is starting to happen. Until eventually they take on more of the right brained way of thinking and this means balanced brains.

This leads to the third Aeon, which we are currently moving into, the Aeon of Veritas (This is the Divine Child part of the Trinity) - this is a time when everyone learns to be balanced, to not be so linear thinking and logical that is removes emotions, but not be too emotional that it removes all logic. This is a fantastic time, the best Aeon, the one that will hopefully last a long time in the future, when we get there. But as with all things, you can not have one thing without the other. Eventually people will enjoy this bliss so much that they start to become too empathetic, and too emotional again and this leads straight back to the first Aeon again, then the second, then the third.

This cycle will keep happening on Earth, there is nothing we can do to stop it, it just happens naturally, all things happen for a reason. we must endure the bad, to get to the good, and we can not have the good without the bad. When we realise this, we can see the crimes of the Aeon we are currently in and we will not fear the new Aeon coming, it is meant to be.